Stocks pulled back from their record-setting run this week as China’s coronavirus outbreak dominated market headlines. The outbreak, which originated in China in December has spread throughout Asia and around the world, sparking concerns of a potential negative impact on global economic output. The headlines swirling around China detracted from another strong crop of Q4 2019 earnings reports. Chip giant, Intel, crushed estimates on Friday, sending shares surging 8.13% to an all-time record high. Intel’s strong guidance prompted at least 15 brokerages to raise their price targets on the stock. In economic news, fundamental data was light with existing home sales and the European Central Bank’s policy meeting being the highlights of the week. For the week, the S&P 500 slipped -1.00%.

U.S. home sales handily beat expectations as existing home sales jumped to a nearly 2-year high in December. For the month, sales rose 3.60% to a seasonally adjusted 5.54 million units. That beat economists’ estimates, who had called for a 1.30% increase to 5.43 million units. Healthy demand for housing helped push the median existing home sales price up 7.80% from the year ago period to $274,500. Inventory also tightened further as the supply of homes on the market fell from 3.7 months in November to 3 months in December – a 20-year low. The latest inventory supply reading is significantly lower than the six to seven months supply which is considered a healthy balance between supply and demand. Despite the low inventory, overall interest for housing remains strong, driven by a strong jobs market and low mortgage rates.

European Central Bank President Christine Lagarde helmed her first central bank policy meeting of 2020 this week. As anticipated, Lagarde announced that the European Central Bank would hold rates steady at -0.50%, something it is likely to maintain for the foreseeable future. The central bank also signaled it would continue its $22.2 billion/month bond-buying program. This program was re-initiated in November as economic conditions in Europe began to teeter, and Lagarde indicated the program would remain in place as long as necessary to prevent the Eurozone from backsliding. In her post meeting comments, Lagarde also revealed that the central bank would be undertaking a broader strategic review of its monetary policy tools in 2020, its first such review in 16 years. The review is expected to include analysis over the use of negative interest rates to spur economic growth as well as the financial risks of climate change. While negative rates have been theorized for some time, the European Central Bank’s recent use of negative rates at this scale has been an experiment. Thus far, the ultraloose monetary policy appears to be giving the Eurozone economy a much-needed shot in the arm, with the latest figures on eurozone manufacturing beginning to show signs of stabilization.

After posting a string of record highs, this week’s dip comes as no surprise. Investors have been looking for a reason to sell for some time and China’s coronavirus is simply the catalyst. Ostensibly, investors are concerned about the virus’ impact in reducing global growth. China remains a major supplier to the world’s factories, and a halt in production and transportation in the region could have a ripple effect worldwide. That is true, but the silver lining (if there is one) is that the timing of this outbreak also coincides with the Lunar New Year when many businesses were set to shutter their doors from January 25th to February 8th already. This buys some time to contain the virus when no economic activity was going to be happening in Asia anyway. It is far too soon to tell what impact the virus will ultimately exact, but using the SAARs outbreak in 2003 as an example, the whole process took about 6 months from the virus’ initial discovery to its resolution, with the vast majority of the global disruption from SAARs lasting about six weeks. Given the increasing coordination between the world’s health organizations, the speed of the official response this time around, along with significantly better identification and monitoring technologies, it is reasonable to think this can be contained even quicker. While all the negative headlines from China put investors on edge, the bigger story is that which is coming from companies during Q4 2019 earnings season. That has been a story of strong demand and solid results. With more than 16% of the S&P 500 reporting results, 70% of those companies have beaten expectations. In addition to reporting good Q4 numbers, management teams are upbeat for what 2020 may have in store. So, with a lot of money still on the sidelines and a solid economic trend in place, these event driven dips like we saw this week are probably going to be met with a rush of new buyers.

Last week, we wrote about the decade of the “young olds” or the yolds. While the yolds are delaying retirement, younger Americans are chasing it. There is a growing trend focused on living frugally, saving aggressively, and investing wisely in order to retire early. It’s called FIRE, and it stands for financially independent, retire early.

Those adopting this approach to their financial lives may have been motivated by witnessing how devastating the 2008 recession was to their parents and realizing they didn’t want to be in the same predicament. Followers of the FIRE movement have shared that they are driven by the awareness of an extreme consumer culture where people spend every dollar they make, don’t have any savings, and feel trapped to continue working in jobs they don’t enjoy in order to sustain their lifestyle. 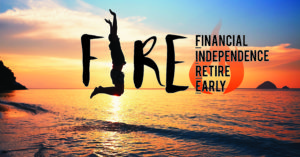 The concept of FIRE has drawn some criticism for being unrealistic and out of reach for most Americans (except for entrepreneurs and high income professionals), but many financial experts observe that the movement is based on some rather sound financial principles. First, pay down debt. The Federal Reserve reports that the total national household debt stands at $13.54 trillion. Debt may include student loans, car loans, credit cards, and other consumer debt. Second, minimize consumption of material goods. There are FIRE blogs, podcasts, and online discussion forums dedicated to sharing advice for how to live a parsimonious life consistent with the principles of FIRE and to remind subscribers and followers that they don’t need the latest iPhone, they can make delicious meals at home, and that there is nothing wrong with driving your 13 year old car. Third, maximize your income. Many FIRE devotees work multiple jobs or start side businesses. Some rent rooms in their homes or apartments while one follower rents his car and uses his bicycle for transportation. Fourth, save. To be financially independent according to the FIRE formula, a person needs to have saved and invested 25 times their annual spending.

The National Institute on Retirement found that only 1/3 of millennials have saved for retirement. Of that 1/3, they have about $19,100 saved on average. Adherents to the FIRE movement strive to save at least 50% to 70% of their income. Fifth, invest wisely. The objective of FIRE is to accumulate income generating assets that reach a level where it pays enough money to live off a “safe withdrawal rate” from a portfolio, typically 3% to 4% per year. The safe withdrawal rate according to the FIRE philosophy assumes 3% inflation and a 7% investment return which is by no means assured. This doesn’t take into consideration market declines or financial emergencies that could potentially derail someone’s financial plan.

Just as there are variations to the latest, trendiest, most popular diet plans, there are several derivatives of the FIRE movement that facilitate different lifestyles that followers may adopt. One is called LeanFIRE. LeanFIRE is when someone has saved up 25 times their annual expenses — the benchmark for financial independence — and spends much less each year than the average American, or around $40,000 according to one FIRE forum. The average U.S. household spends about $61,000 per year, according to Census data. By contrast, FatFIRE is when someone has saved 25 times their annual expenses and spends more than the average person. Another popular variation is called BaristaFIRE which is about saving enough so you only need to have a little bit of income to support your lifestyle. Instead of working 40 hours per week in a corporate position, you have accrued a large enough portfolio and live frugally so that you could afford to work part time in a coffee shop.

For many, FIRE doesn’t mean not working, but instead it means having the freedom to choose work that you truly enjoy or to work less, even if you may not earn as much. We advise anyone considering a FIRE strategy as part of their financial plan to please call our office to speak with one of our advisors for a free, no obligation consultation. Our advisors are happy to discuss a variety of practical and realistic strategies to help you pursue and achieve financial independence.