Fast-moving markets kept investors on their toes while they sought to close the books on a volatile April. Concerns escalated early in the week on reports of growing Covid outbreaks in China that threaten to snarl supply chains further. Beijing, a population of 21 million, was the latest megacity to be caught in China’s zero-Covid strategy crosshairs. In recent days local officials have raced to avoid an all-out, Shanghai-style lockdown, proactively closing schools, gyms, malls, and cinemas to contain the growing outbreak. Regardless, the Chinese economy appears set to take a sizable hit to production and consumption now that an estimated 80% of the country’s economic output is under significant mobility restrictions. This is up from 40% of the country’s total economic output under such restrictions just last week. The expanding lockdown prompted Apple to announce that as much as $8 billion in sales could be impacted, shaking investors. Meanwhile, here at home, the U.S. economy saw the aftermath of our own domestic Covid surge from this past winter. U.S. Q1 2022 GDP fell -1.40% led by a decline in fixed investment, defense spending, and a record trade imbalance. Despite the shortfall, economists expect the drop to be temporary given consumer demand and healthy wage gains. Markets had been set for a flat week before the bottom fell out on Friday, with the S&P 500 down -3.27% by the close of trading.

Rising Omicron infections early in the year, high prices, and the Russian invasion of Ukraine all weighed on economic sentiment in the first quarter. U.S. GDP fell -1.40% as a drop in private inventory investment, surging imports, and a decline in government spending more than offset a rise in consumer spending. Defense spending fell -8.50% and proved to be a particular drag on growth. Yet, that should reverse quickly with the U.S. seeking to keep arms flowing into Ukraine as the war rages on and the military replenishes inventory. The trade deficit was also a drag on growth during the quarter, shaving -3.20% off economic output as imports outpaced exports. That too should reverse course with the U.S. looking to step up its exports of energy to Europe to help with reducing its reliance on Russia. The drop in GDP was impacted by a temporary Covid surge and the war in Ukraine stands to be a strong driver of demand for the defense and energy industries. While concerns over a recession may be increasing, those factors were not on display in Q1, and we’ll likely see a resumption of growth in Q2. Beyond that, the forecast gets murkier.

Consumers continued to open up their wallets in March. Consumer spending rose a strong 1.10%, beating estimates of a 0.70% increase. Factoring in inflation, consumer spending was up a more modest 0.20%. Consumers had to pinch in order to fill their carts given that wages continued to lag inflation. The Federal Reserve’s preferred measure of inflation, the PCE index rose 0.90% in March while income rose just 0.50%. To make up the shortfall, consumers have increasingly tapped their savings and turning to their credit cards to fund their spending on travel, hotels, restaurants, and other services. The savings rate in March fell to 6.20% from 6.80%. Both figures are well below the pre-pandemic level of 8.30%. Credit and debit card spending has been strong, up 15% year-over-year according to Bank of America. For lower income groups (<$50K), it is up a stunning 33.30%. Although the desire to spend remains strong, the funds to do so are increasingly becoming scarce and with rising interest rates and the myriad of factors impacting inflation, consumption is likely to cool in the coming months.

Everyone seemed relieved to close the books on April’s trading this week. The S&P 500 decline -9.11% for the month. That was the index’s worst performance since March 2020. While that may have been painful, the decline in growth and tech stocks has been even more punishing with the Nasdaq posting its worst monthly performance since October 2008, falling -13% in April. Throughout the month, investors have been barraged by a theme of accelerating inflation, Federal Reserve hawkishness, anxiety over the war in Ukraine, and China’s Covid outbreaks that has simply worn down sentiment. The tech heavy Nasdaq has fallen back into bear market territory, revisiting its mid-March lows, while the treasury market has been caught between the Fed’s rate push on the one hand, and recession concerns on the other. This caused the ten-year treasury yield to first surge and then to bounce either side of the 3.00% level. Even value stocks, which had held up well throughout much of the year, managed to tip slightly negative on Friday. Earnings continue to be reasonably strong, but even that has failed to stem the pessimism. Q1’s earnings appear to be on track for 10.10% growth with roughly half of the S&P 500 index constituents having reported, according to Refinitiv.  This is both higher than expected and an upward revision from where we stood just last week. When you strip out the energy sector, however, that rate declines back to a more meager 4.4%, which explains the lukewarm reception by investors.  May now lies ahead and it kicks off the summer-to-fall season which is historically a poor time for markets. With two large Fed hikes expected in May and June, there are just not a lot of positive catalysts for markets right now, and despite April’s swoon, the selloff has not been so great to believe we’ve seen a bottom at this point. “Sell in May and go away” might be the natural inclination, but sentiment does appear to be eroding faster than fundamentals are really changing which tends to be a good time to be shopping for value.

It will be a big week for markets with April nonfarm payrolls and ISM manufacturing and services reports all on tap. Traders will also be paying close attention to the Federal Reserve’s FOMC Meeting. The central bank is widely expected to announce a 0.50% rate hike which will bring the benchmark interest rate to a range of 0.75%-1.00%.

There is nothing quite like the feeling of being able to gather with friends in person and celebrate, and last night, we were so fortunate to be able to finally do so once again as we hosted our friends, family, and clients at the George W. Bush Institute on the campus of Southern Methodist University for our Spring Soiree. The gathering was made more special given the event’s two-year pause during the pandemic. The hiatus truly sweetened last night’s atmosphere, where friendships picked right back up where they left off to make this a joyful occasion.

We could not have asked for better weather or more incredible views from the terrace overlooking the 15-acre Texas Native Park. Dallas String Quartet, a crossover ensemble that performs contemporary versions of modern rock and pop songs, and solo guitarist Chris McGuire rounded out the ambiance and fostered the revelry.

In the end, it felt like long awaited homecoming, and we thank all of our guests who made the evening so memorable.

We will share more photos from the event soon, but in the meantime, please enjoy some of the evening’s highlights below. 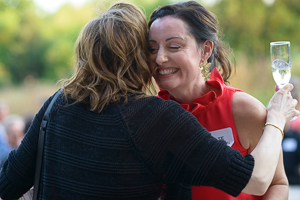 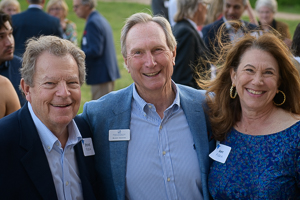 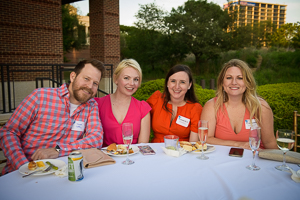 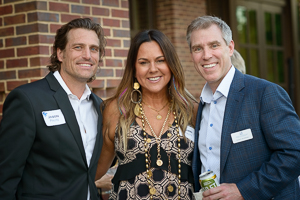 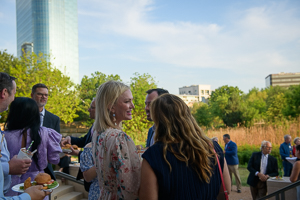 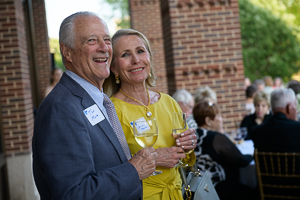