Turning the page on a new year didn’t do much to diminish this week’s volatility. Investors grappled with a series of contradictory economic indicators while continuing to fret over the prospects of higher rates amidst slowing global growth for 2019. Thursday’s Institute for Supply Management (ISM) index reading caught markets entirely by surprise, suggesting manufacturer activity had suffered its biggest drop in a decade in December, while Apple issued an unexpected warning that its earnings would miss expectations due to decelerating sales in China. By Friday, however, investors saw new evidence in support of sustained economic momentum with a strong jobs report which in many respects contradicted weaker indicators elsewhere, while Jerome Powell issued some of his most dovish comments yet as Fed Chairman. The Dow Industrial managed to see several large moves during the first three trading session of 2019, ending up 1.61% for the week.

Factories Idle Down in December

Thursday’s ISM Manufacturing PMI shook markets by registering a 54.1 in December compared to a 59.3 in November. This was not only below economists’ expectations of 57.9, but was both the weakest number since November 2016 and the largest monthly drop since October 2008. The figure was weighed down by slowing growth in new orders, production, and employment. The New Orders sub-index showed the largest decline, dropping to 51.1 from 62.1 in November, while production dropped to 54.3 from 60.6 respectively. On the surface, the report is not a positive one, indicating that U.S. produced goods are having a tough go around now that retaliatory tariffs are in full force, but there are some reasons to suspect that the figure is not as bad as it may initially appear. The first is that the ISM is highly influenced by the perspectives and moods of managers, who, in light of the trade war and market volatility, may not have been in the most optimistic of dispositions. In fact, as Justin Lahart pointed out in the Wall Street Journal, amidst the market volatility during the 1998 Russian Debt crisis, the ISM misleadingly fell to 46.8, only for economic growth to propel much higher in 1999. Next, while the consensus for ISM was for a much higher reading than what we got, many of the regional readings were already suggesting there was a slowing trend occurring. Those readings indicated the ISM should have been closer to 55, suggesting Thursday’s sell off was an emotional reaction to the headline figure. Lastly, the previous ISM levels were unsustainably high. The long-term average ISM reading is approximately 54, consistent with today’s levels and also consistent with average growth – a return to a condition which we have been anticipating for some time. Alas, the issue appears not to be so much with the actual reading itself but rather with the rate at which the decline occurred, but December’s report is worth noting.

Jobs Blow It Out

If growth were a concern in the ISM report, you wouldn’t know it from December’s Employment Situation release. The report is among some of the strongest of this expansion, with the Bureau of Labor Statistics reporting that nonfarm payrolls increased by 312,000 in December 2018, which easily beat market expectations of 177,000. The job gains were broad based, suggesting employer confidence in hiring in areas that had been thought of as cooling such as construction, manufacturing, and retail trade. This increase in jobs pushed total U.S. employment above 150 million jobs for the first time in history. The oddity was that the unemployment rate actually rose 0.2 percentage points to 3.9% in December. This is a statistical abnormality as more and more individuals are coming off the sidelines to seek work. Wage growth was very strong – almost too strong. Under any other circumstance, this jobs report might have been interpreted as piping hot and would have raised investor concerns that the Fed would be more aggressive, but against mixed economic signals and the Fed’s recent softening, the market took this report as a big save.

The negative mood hanging over the equity markets over the last quarter has been almost entirely centered on top level macro-economic factors, namely rising interest rates, tariffs, and slower global growth. These, understandably, have the potential to affect the U.S. economy’s fundamentals – but for most of 2018 – had yet to do so. We’re now seeing a greater number of readings move from strong expansion to slower expansion, and with greater consistency. Just this week, Apple provided weaker guidance, revising Q1 2019 revenue estimates down to $84 billion from $91 billion. Apple attributed the downside revision to a weakening Chinese economy and lower-than-expected iPhone revenue. Apple’s pain is mostly due to China, but signals of slowing economic growth could be seen from countries across the globe as well. Markets saw Apple’s warning not only as a proxy for what is transpiring with growth globally but also as a measure of the disruption the trade battles are having on companies, their supply networks, and their access to markets. Next week will bring this issue front and center again, with the U.S. and China sitting down for fresh trade negotiations.

The question to whether the market’s volatility has been reacting to actual data insights or simply economic policy seems to have been answered following Jerome Powell’s comments before a conference in Atlanta on Friday. Markets rallied nearly 700 points after Powell suggested the Fed was not on a fixed path to push rates higher. Apparently ignoring both the most recent wage growth figures and bowing, at least a little, to pressure from financial markets, Powell chose to comfort investors by suggesting that muted inflation readings will provide the central bank with more flexibility in how and when they choose to raise rates. This was generally the same exact thing Powell had said following December’s FOMC meeting, but apparently the tone was more suitable to the market’s sensitive ears this time around. The comments were exactly what the market had been asking for since October and it will now be interesting to see to what degree this lifts spirits.

Markets continue to be a tempest within what, by most accounts, seems to be a sound, economic teapot. Granted, we are late into a long economic expansion where a deceleration in growth would be expected, but it is seemingly not the slowing of growth that has had the market worried. It is the prospect of slowing growth in the context of a tightening Fed that has led to the recent toxicity. The near-term volatility has to be understood, however, from the standpoint that ever since the Financial Crisis, investors have been conditioned to the Fed backstopping markets. This was known as the “Fed Put”, which Powell publicly dismissed when he became Chairman. With his comments today, in lieu of the balance of economic evidence suggesting the Fed should still be biased towards tightening, one has to wonder if investors have now received a “Powell Put”?

The week ahead will bring investors a plethora of economic data to digest, starting with ISM Non-Manufacturing PMI – which will relay information about the service industry. On Monday and Tuesday, investors will pay close attention to how the U.S.-China trade talks pan out while also gaining key insights into the current account balance (imports & exports). At the latter end of the week, inflation data will be released by China and the U.S. which will give U.S. investors a considerable hint as to if Jerome Powell’s comments about muted inflation were warranted or not. 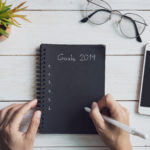 Setting resolutions at the beginning of a new calendar year can help you reach short- and long-term goals, and science shows it can even improve the way you feel. Researchers say that about 60% of us make New Year’s resolutions which include anything from getting more exercise to quitting a bad habit to starting a new hobby. Nearly one-third of adults (32%) are planning to make a money-related resolution for 2019, according to a survey by Fidelity Investments for their 10th annual New Year Financial Resolutions Study. This number is up from 27% last year which was an all-time low in the study’s decade-long history. The study shows that, overall, Americans are optimistic about their financial lives, both currently and into the future. When asked to assess whether their family is better off, worse off, or in a similar financial situation compared to this time last year, 87% of people say they are in a better or similar financial situation. Those who feel they are in a better situation point to a strong savings discipline: 55% say saving more money has helped, followed by budgeting (53%). According to the survey, 75% of Americans predict they will be better off financially in 2019 than they were in 2018.

For the tenth consecutive year, the top three financial resolutions heading in to the new year are (1) saving more, (2) paying down debt, and (3) spending less. Among those who pledged to save more in 2019, the percentage saying they plan to save for long term goals such as retirement, college, health care, and long-term care, hit an all-time high of 66%, up from 54% in 2017.

A commitment to financial wellness seems to be taking hold. When asked to reflect on the areas where they made the most personal progress over the last decade, financial health topped the list at 39%, followed by emotional health at 28% and physical health at 23%. It appears Americans would rather save money and spend less than exercise or eat right.

Last year was not without a few financial hiccups. Survey respondents admitted making financial mistakes that derailed their resolutions, including dining out too frequently (28%), splurging on something they couldn’t afford (19%), neglecting to return or exchange unwanted purchases (18%), paying for subscriptions they don’t use (18%), and paying too much in fees like ATM, transaction fees, credit cards, or late payments (18%).

The study revealed that Americans don’t believe that money is everything. When asked what they want to do for themselves in 2019 to enhance their mental health and happiness, 78% said spending time with those they love is a priority for the coming year.

The start of a new year is a great time to look back on the decisions that shaped our financial lives during the past year and to make adjustments for the next one. If you have resolved to make financial wellness a priority for 2019, Probity Advisors, Inc. can help. Please feel free to call our office today to schedule a meeting with one of our advisors.