The Dow Jones Industrial Average stumbled out of the blocks to kick off the week’s trading. Growing concerns that the Covid-19 delta variant would lead to a spike in cases and derail the economic recovery sent the Dow down 725+ points on Monday. The sell-off proved to be short-lived as cooler heads took the reins on Tuesday, sending the Dow up 550 points and on its way to a new all-time high by week’s end. The sentiment shift was sparked by investors’ confidence that businesses and consumers around the world will be able to combat the current Covid wave through a mix of rising vaccinations and/or social distancing measures. Q2 2021 earnings reports continued to be strong, with earnings now expected to rise 78.10% year-over-year (yoy). U.S. economic news was relatively light, with reports on existing home sales and housing starts being the highlights of the week. Across the pond, the Eurozone economy continued its robust recovery with composite PMI pointing to solid demand. By week’s end, confidence had returned to the Street with the Dow Jones Industrial Average finishing the week up 1.08% to hit a new record high of 35,061.55

Sitting on the sidelines for four straight months proved to be too much for homebuyers to handle. Despite low inventory pushing up prices, homebuyers were back to scooping up homes in June. Existing home sales rose 1.40% for the month to a seasonally adjusted annual rate of 5.86 million. Total sales were higher by 22.90% yoy. The strong demand pushed the median price of an existing home to a new all-time high of $363,300. That’s 23.40% higher than year ago levels. Inventory remained extremely tight, with 1.25 million homes on the market. That represents a 2.6 month supply at the current sales pace. By comparison, six to seven months is considered to be a healthy balance between supply and demand. Homebuilding also rose in June as homebuyers turned to building new homes due to a lack of existing inventory. Housing starts rose 6.30% to a seasonally adjusted annual rate of 1.643 million. YOY housing starts were up 29.10%. However, permits for future home construction fell to an eight-month low as builders faced significant hurdles to breaking ground with high prices for building materials as well as labor and land shortages. Builders have also been hit by Covid-induced supply issues in recent months with reports of multi-month delays in the delivery of windows, heating units, and refrigerators. Strong demand, low supply, high materials costs, and supply chain issues suggest the housing market will remain tight for some time to come.

Boom Times for the Eurozone

Europe kicked off the third quarter on a high note, with business activity soaring at its fastest rate in 21 years in July as the economy re-opened from Covid-19 restrictions. The IHS Markit Composite PMI Index rose to 60.6 in July from 59.5 in June. Numbers above 50 indicate expansion, while numbers below 50 signal contraction. Manufacturers drove economic activity, with Eurozone Manufacturing PMI hitting 62.6 in July on strong demand for goods. The services PMI also had a strong showing, rising to 60.4 in July. That was the index’s fastest rate in 15 years. A strong upswing in the tourism and hospitality industries on loosened virus restrictions helped drive the services industry higher. Economic momentum in the bloc should remain strong as pent-up demand prompts higher spending among consumers and businesses, much as it did in the U.S. as it loosened Covid restrictions earlier this year.

Monday’s market swoon was virtually forgotten by the close of trading on Friday, with the Dow crossing the psychologically important 35,000 mark. Dip buyers have managed to keep the markets aloft by preventing the type of multiday selling momentum that can quickly compound into swift downdrafts. Investors believe in the safety of large numbers, and seeing the market bounce on Tuesday, investors managed to see the silver lining. The fact is that while cases are going up, the vaccines still appear very effective, and people are better conditioned to social distancing. There undoubtedly will continue to be the occasional hiccup, but the science and the trend are ultimately favorable, and Wall Street knows it.  Any dip is seen as an opportunity to still catch the reopening wave.

With 35,000 now behind it, the Dow now eyes 36,000 – a level that was controversial when it was proposed by economists James Glassman and Kevin Hassett as representing the true fair value of the Dow Jones Industrial Average back in 1999. Keep in mind the Dow was trading at 11,750 at the time. The valuation was based on the concept that investors had mis-valued the equity market by assigning it a higher risk premia relative that of bonds. They argued that over time the risk premia demanded by investors would fall, resulting in the Dow attaining the 36,000 level. Granted Glassman and Hassett were entirely wrong on their timing, having predicted it would do so by 2004 and having failed to account for the dot.com bust, terrorist attacks, the financial crisis and the pandemic – but eighteen years later the Dow’s 36,000 target is squarely in sight.

It’s going to be a big week for markets with the Federal Reserve holding its FOMC meeting. Also on deck is our first read on Q2 2021 U.S. GDP. Personal income and consumer spending figures on Friday round out the week’s top economic reports.

Lumber has been on a wild ride. Between late 2019 and early 2020, the price of lumber ranged between $399 to $435 per thousand linear feet. The price was up over 300% this past spring, surging from $349 per thousand board feet in April 2020 to an all-time high of $1,515 in May 2021. The board foot is a unit of measurement used in the U.S. and in Canada to measure the volume of wood. A piece of wood that is one inch thick by one square foot equals one board foot.

Last week, lumber prices per 1,000 board feet crashed back down below $500 on July 15, 2021, only to start climbing again. The price gyrations have been driven by what has been described as a perfect storm of factors. When COVID-19 broke out in spring 2020, sawmills cut production in anticipation of a steep decline in demand and to protect the health and safety of workers. Sawmills began planning on a long-lasting and deep recession and unloaded inventory. Many in the industry anticipated a housing crash. The crash didn’t happen—instead, the opposite occurred. Demand took off as Americans tackled do-it-yourself projects at home, such as building decks and fences, given that they were staying put, had more time on their hands, and were flush with cash. The U.S. began to see one of the most frenzied real estate markets in a generation due to remote work, a desire for more space, and pandemic induced low interest rates. Furthermore, millennials – those born from 1981 to 1996 – were hitting their early 30s and entering their peak home-buying years. This led to a shortage of housing inventory, turning prospective buyers to new construction. All of those new fences, decks, and homes require a ton of lumber. The short supply and high demand drove prices up.

When sawmills re-opened, Covid-induced protocols slowed production. The U.S. and our northern neighbor Canada, which is the largest exporter of lumber to the U.S., were still addressing a decades-long outbreak of bark-eating beetles combined with several seasons of wildfires that affected supply. Millions of acres of timberland that would have produced billions of board feet of lumber were wiped out by blazes in 2020 alone. Heading into 2021, builders, who were continuing to see rising prices and scarcity of supply, scrambled to buy and stockpile inventory which caused the price soar further. Builders need about 15,000 board feet, on average, to construct a single-family home. The chart below shows just how incredible these price swings are when looking at pricing data from July 2016 to July 2021. 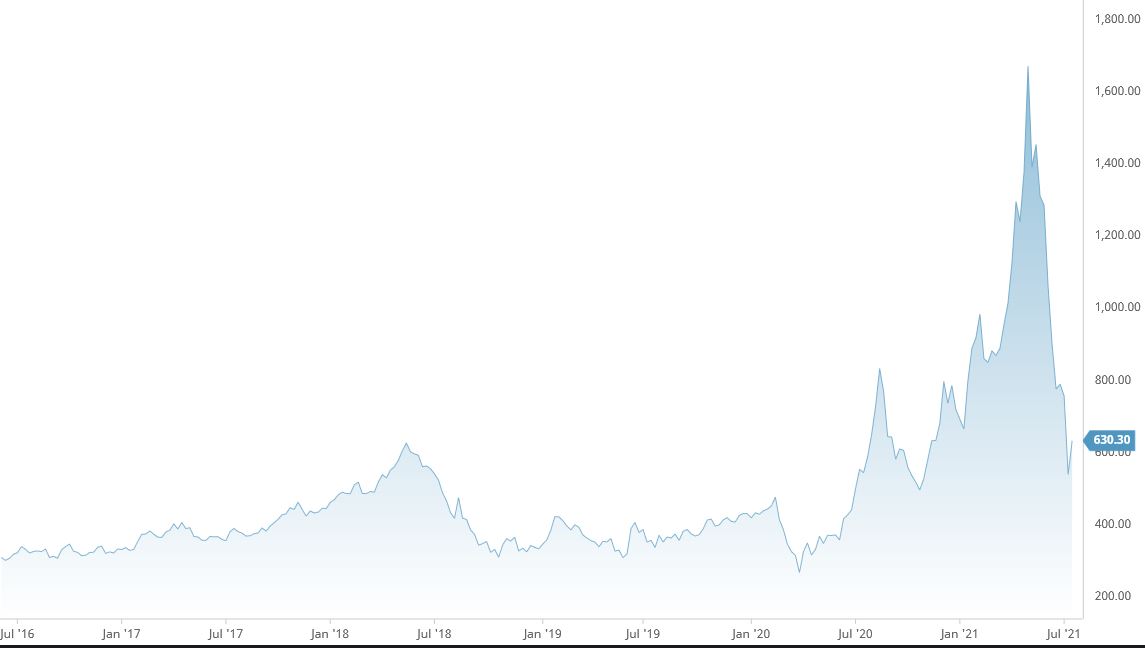 The lumber shortage and price increases have been adding at least $24,000 to the cost of an average new home, according to the National Association of Homebuilders. Larger homes could expect increases of $50,000 or more on the cost of wood alone. Builders have reported hiring security guards for new home construction sites to ward off would-be thieves given the scarcity of supply and the high prices wood has been demanding.

In recent weeks, demand from homebuilders and DIYers began cooling as a result of the historically high wood prices,  along with supply issues and price increases in other building materials as mentioned in our weekly commentary above, and turned-off buyers. Americans are spending more on travel as pandemic restrictions are lifted and less on their homes. Last month, building permits, a forward-looking indicator, dropped 5.1% to an eight-month low. Just as demand began to cool, fires broke out that again threatened the lumber market supply chain. We are at the beginning of what looks like it could be an unusually severe wildfire season with fires blazing in Canada and in the U.S.  Large producers have announced production cuts due to challenges in transporting lumber to and from their sawmills. The wild gyrations that took lumber from a record high in May to an eight-month low last week are likely to continue.