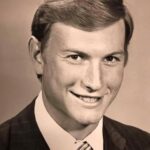 This week, we are thrilled to be celebrating the 50th work anniversary of Probity’s president and founder, Porter L. “Buddy” Ozanne, III. Buddy started his financial services career on January 2, 1971, and over the past five decades, he has helped innumerable families and individuals create and conserve wealth. He has also shared his wisdom and insights – both personal and professional – with his employees, clients, friends, and with countless students and professionals he has mentored over the years.
Those who know Buddy appreciate his warm and welcoming demeanor, his sense of humor, and his wonderful storytelling abilities, a trait we suspect he inherited from his father who loved sharing tales of his experiences as an officer in World War II.

To know Buddy is to know our firm. We wanted to dedicate this week’s communication to a Q&A with our founder, our friend, and our mentor as a way of honoring his milestone and sharing his journey and wisdom with others.

I understand you were an English major at SMU. How did you end up president of a financial services firm?
I was the first person in my family to attend college, and I always thought that earning the degree was more important than what I chose to study. My freshman English professor, Sandra West, was fabulous and encouraged me to become an English major because she thought that I had great “perspicacity.”
Have you always lived in Texas?
I am a native Texan. My mother grew up on her family’s cotton farm in North Texas. My father’s parents moved from Nashville, TN to Dallas in 1919 when my grandfather took a job with Pittsburg Plate Glass, a precursor to PPG Industries. I attended Southern Methodist University (SMU) and spent the summer after my freshman year in an internship in Boston where I worked the nightshift in the publishing house for the Christian Science Monitor. While I was an English major, it wasn’t like I was doing any editing or publishing. It wasn’t a glamorous job by any means, but I learned a lot about life in the summer of 1967. My apartment was located in the middle of Roxbury, the neighborhood that became the epicenter for the city’s protests. I made new friends from all walks of life who probably saved my life. It was the summer of student unrest over the Vietnam war, of the Roxbury protests, and of Stokely Carmichael’s march down Massachusetts Avenue. It was tumultuous times much like today. I am so grateful for the folks who took me under their wing and looked out for my safety. It shows the power of humanity and the importance of showing kindness and compassion to others. I think we could all use a lot more of that right now.
How and when did your father start his career in financial services?
My father, Porter L. Ozanne, Jr., worked in oil fields in Texas and Louisiana in the 1940s until settling down in Dallas and becoming a successful insurance agent and then opening his own agency, Ozanne and Associates. Back then, insurance was synonymous with financial services. Most people didn’t have a broker or a planner, but they had an insurance agent. He was really at the forefront of the evolution from such a singular focus on one aspect of a client’s financial life to providing comprehensive and ongoing financial guidance. My father worked long hours and six-day work weeks which instilled in me a strong work ethic and the importance of putting clients’ interests first. I often tagged along on some of his client meetings, and I saw from an early age the positive outcomes that my father’s financial advice provided individuals and families. 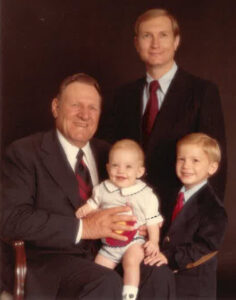 Buddy with his father and his two sons, Tyler and Sloan, c. 1980

You followed in your father’s footsteps. When did you begin working with him?

I joined Ozanne and Associates in 1971 and spent five years under my father’s tutelage before acquiring the business in 1976. Early on, we illustrated to clients the importance of proactively thinking about their financial future by modeling the tax impact of dying without a plan. We referred to our approach as “killing people on paper” or “killing them with paper” because if you weren’t dead, seeing the impact of taxes might be enough to kill you. At that point in time, the financial services industry was really product and sales driven, but we observed that the service, the consultation, and the education we provided were so much more valuable and important to clients than the sale of financial products. Not many advisors were offering robust financial planning services and very few were taking the time to educate clients and help them understand and gain comfort with their financial decisions and with their retirement plans.
In those days, you didn’t have sophisticated risk management and data analysis tools or software programs like we have today. How did you create financial plans back then?
There was a lot of manual number crunching. In the early 1970s, Texas Instruments came out with the very first handheld, electronic slide rule calculator, the SR-10. It cost $110 new, but my uncle, Warren Ozanne, was an engineer with Texas Instruments and was able to get one for me with his employee discount for only $90. In 1984, I was able to purchase an IBM desktop PC computer that used a floppy disc. I purchased a robust (at the time) financial planning software program from Lumens Systems which did a pretty good job of creating simple financial plans. Once the data was entered, I found it was convenient to schedule lunch shortly thereafter to let the computer run the calculations while I was away. We didn’t have the processing speed that today’s computers have.
You founded Probity Advisors, Inc. in 2002. Can you describe what led you to start another company in your mid-50s?
Over the years, our business had evolved from an insurance company, to a financial planning practice, to a comprehensive wealth management firm. Founding Probity was the next natural evolution that was really born out of necessity.  At the request of many clients, I had already begun building individual stock portfolios and was managing assets on a discretionary, fee-only basis. There was demand from clients to provide ongoing advice and oversight in conjunction with my planning services. 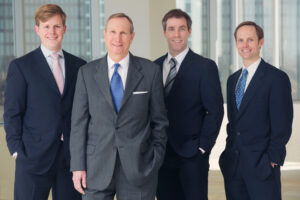 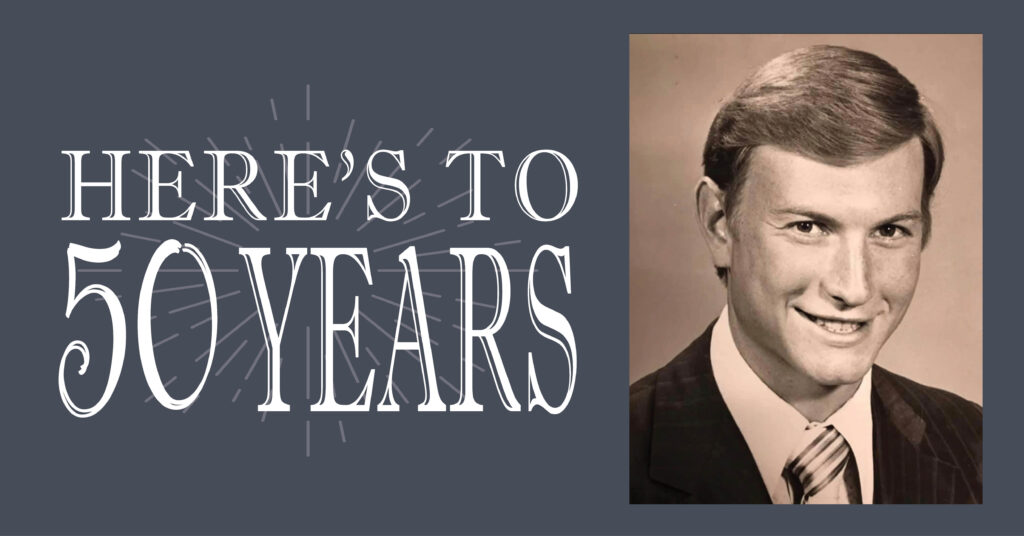