It was a wild trading week on Wall Street as a flash mob of Reddit traders faced off against hedge funds in a battle that has been brewing over several weeks. Amateur traders have taken to online trading boards, sniffing out hedge funds’ top short positions (GameStop, AMC, and Blackberry) in hopes of rallying sufficient investor demand to force hedge funds to buy back their losing short positions and send prices higher in these risky names. On Wednesday, the battle on the Reddit boards spilled over to the broader market as investors grew anxious hedge funds would be forced to liquidate long positions to raise cash in an effort to defend their short bets against the day traders. Concerns also grew that a scramble to sell shares could cause ripple effects throughout the financial markets, and lead to liquidity issues at brokers such as Robinhood. On Thursday, in response to the frenzied trading, brokers limited trading in these names in order to shore up their capital. In the case of Robinhood, it raised more than $1 billion from investors on Thursday evening and tapped its credit lines to ensure it had the capital required to allow limited trading again on Friday in these volatile names. With investors riveted by the trading battle between Redditors and hedge funds, they were quick to dismiss the week’s Q4 2020 GDP report, the Fed’s FOMC meeting, and personal income figures. For the week, the S&P 500 ended down -3.31%.

The U.S. economy continued to expand in Q4 2020 despite tighter operating restrictions to combat the winter surge of Covid-19 and a delayed pandemic relief bill. For the quarter, GDP rose 4.00%. Growth was driven by an increase in consumer spending, exports, residential investment, and private investment which helped offset a reduction in government spending at the federal, state, and local levels. Despite what is expected to be a slow start to 2021 as the country struggles to contain the pandemic and roll out vaccines, the economy is expected to rebound strongly in the back half of the year.

The Federal Reserve held to script by extending its easy monetary policy. Following its FOMC meeting this week, the Fed voted to keep benchmark interest rates near-zero and continue its bond-buying program. That should ensure cheap credit will continue to flow to businesses and households struggling during the pandemic. In its official statement, the Fed noted that economic activity had moderated recently due to COVID, particularly in sectors dependent on high social contact such as restaurants, hotels, and airlines. The Fed went on to acknowledged that the path for the economy remains highly dependent on the rate of progress in vaccinations and that the Fed remains prepared to utilize its full range of tools as it deems necessary. The central bank’s announcement was entirely anticipated, while Wednesday’s market sell-off accelerated following the release, this likely had far more to do with other factors than the Fed’s news itself.

Household income which includes wages, investment returns, and government-aid programs rose 0.60% in December. That was the first increase in three months, driven by another round of government-aid which consisted of enhanced unemployment benefits and $600 stimulus checks to the majority of the nation’s households. Despite the extra cash in their pockets, households have recently cut back on their spending which led to a -0.20% drop in consumer spending in December. A lot of the front loaded spending associated with transitioning to a home-centric existence appears to be waning, with consumers now in a state of suspended animation with respect to spending on big-ticket, durable good purchases. Sales of once hot ticket items such as cars and household appliances both fell in December. On a positive note, the reduction in spending has left consumers more flush with cash. The personal savings rate rose to 13.70% last month. That remains significantly higher than the pre-pandemic level of about 8.00%. Excluding some of the noise associated with the first round stimulus checks last year, the current savings rate is at its highest level since 1975. Economists estimate U.S. households have accumulated $1.6 trillion in savings since the onset of the pandemic. Given the government-aid programs, booming stock returns, and rising home values, households look well primed for a post-pandemic spending boom.
Most of the financial news this week focused on the unfolding drama being played out between retail investors and hedge funds in some of the market’s most heavily shorted names. For the uninitiated, a “short” is when one borrows shares of a company, sells the equity, and profits if the shares decline in value (purchasing the shares back at the lower price). While it is easy to get irritated with short sellers, they provide an important role in the market by putting pressure on companies to continuously meet investor’s expectations and by providing motivation to find companies with dishonest financial reporting. Like anything, however, when taken to extremes bad things happen, and for years, large, well-funded hedge funds have banded together to overwhelm and manipulate the liquidity (and de facto the price) of certain companies. At times, more than 100% of certain firms’ equities have been shorted, meaning that the obligations to replace those shares were technically greater than the shares that actually existed. When these conditions arise, it sets the stage for what is known as a “short squeeze”. If demand for the security overwhelms the selling pressure, then the stock rises and upward momentum accelerates as short sellers clamor for the limited number of traded shares to cover their losses. This is exactly what has played out in spectacular fashion this week as retail investors banded together through social media forums to force a short squeeze in a number of names, GameStop and AMC Theaters being the most notable.
Depending on the news source, the articles either portrayed the retail investors, or Reddit Army, as doling out just revenge against hedge funds by beating them at their own game, or as a marauding mob of amateurs united in a goal of intentionally manipulating the pricing of securities far above anything the company’s fundamentals could possibly justify. Most of these articles miss the larger point, however. While participation by a broad number of investors is imperative for efficient markets and accurate price discovery, new technologies whose goal is to arm hordes of bored, new investors with free trading and leverage are bombs waiting to explode. For every claim that will be made that these platforms level the playing field for the little guy (for whom we still consider ourselves among) and that they democratize financial markets once and for all, they gamify financial markets and increase systematic risk for all investors. When stock trading becomes entertainment, it usually ends badly. We’ve seen this movie before. It was called the Dot.com bust. AMC and GameStop are the names getting attention, but speculation within the broader market is becoming more and more pervasive. Take Apple for example. Remember when Apple became the first company in history to cross the $1 trillion valuation in August of 2018? Today it stands at $2.2 Trillion – at a time when its overall net income has only increased approximately a whopping 7.5%!
To be fair, blame for the brewing bubbles can’t be laid solely at the feet of retail investors. They are just the most emblematic because their behavior manifests in spectacular ways. The institutional players are just as guilty but happen to have great marketing teams so their bets get labeled as “consensus”. Let’s not forget, the Fed also has a big role in all this as well. It’s a Catch-22, as low rates are necessary to help the economy, but low rates also breed asset inflation. All this has led to massive leverage flowing into equity markets and that is what we are seeing with margin debt increasing 60% from March to December 2020.
So what is an investor to do? As we’ve talked about for several weeks now, despite our concerns over valuations, it is hard to fight the combination of stimulative monetary and fiscal policy at a time when vaccines should help normalize life and unlock a massive amount of pent-up demand. A 10-20% sell-off would be entirely justified from these levels. While that may be a road bump for longer term investors, for those who may need near-term access to liquidity, we think it is appropriate, if not imperative, to begin having discussions and to begin building reserves in anticipation of a potential correction.
The Week Ahead
It will be a big week for economic data with reports on nonfarm payrolls, manufacturing, and services. We’ll also check in on the world’s factory floor as China releases January manufacturing numbers.

Americans on the Move

Earlier this month, United Van Lines released their 44th annual National Migration Study, revealing the moving patterns for Americans in 2020. The study looked at states with more than 250 moves and then analyzed the data for the moving company’s customers. Despite the pandemic, people continued to move at rates comparable to 2019.
The study ranks states based off the inbound and outbound percentages of total moves in each state. A state is classified as “high inbound” if 55% or more of the moves are going into a state, “high outbound” if 55% or more moves were coming out of a state, or “balanced” if the difference between inbound and outbound is negligible.
Where did people go? The research showed that Americans moved towards the west, the south, and the southeast. The top inbound states of 2020 were:
This year’s survey indicated 40% of Americans who moved did so for a new job or a job transfer. More than one in four (27%) moved to be closer to family which is significantly up over prior years. The pandemic has had a big influence on why people packed up and headed elsewhere. COVID was cited as influencing the decision to move by just 4.6% people in March and rose to 15.4% of people in October 2020. Among those who cited COVID as an influence for moving, the top reasons were:
What states did people leave most? People seem to be fleeing cities and states with higher population density and higher cost of living. New Jersey has held the spot for the most outbound moves for three years. The top ten outbound states for 2020 were:
The top three metropolitan areas ranked by increase in year-over-year outbound moves from 2019 to 2020 are the following:
The chart below shows an overview of state-to-state migration patterns, with the darker yellow indicating a greater exodus and the darker blue indicating higher inbound moves. 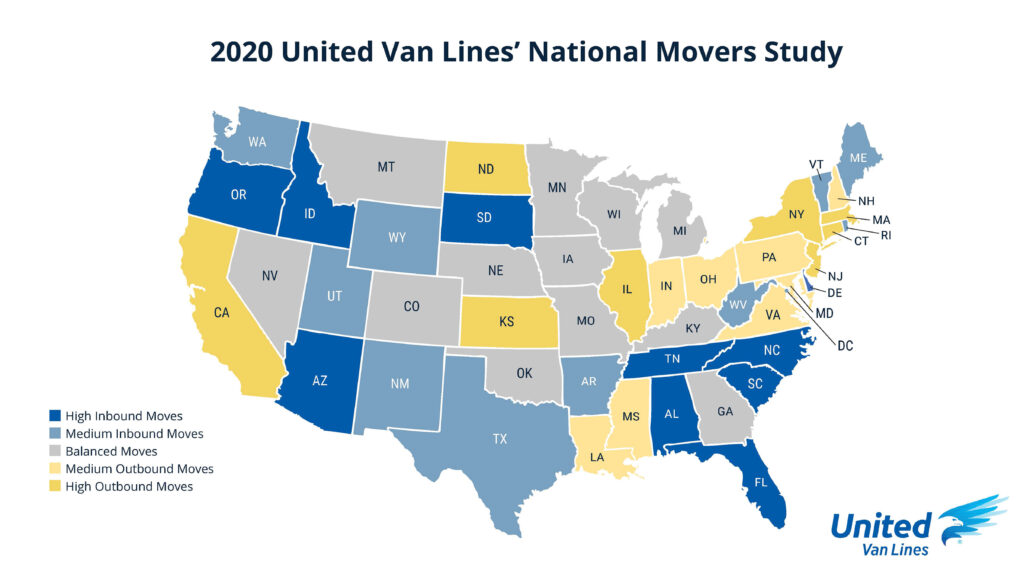