A strong retail sales report and a bump in housing permits signaled consumers were ready to spend their recently stockpiled savings and government stimulus checks now that most states have lifted their stay-at-home orders. Industrial production rose in May as the most recent report showed factory floors spinning back up. Improving economic fundamentals helped renew market optimism for a healthy economic rebound despite a recent rise in COVID-19 cases. Roughly half the country is now seeing a surge in cases, up from a week ago when only one-third of states were reporting rising infections. For now, the market is focusing on the bounce in economic figures and the governmental backstop, including the Fed’s first-time ever purchases of corporate debt this week, much more so than seeing the risk of the rebound stalling as some companies have begun to selectively close again in response to COVID flare ups. Overall, it was a bullish week with the S&P 500 rising 1.86%.

Consumers Make a Break for Malls

Bored from isolation and flush with cash, consumers chose to stretch their legs and hit the mall. Retail sales for May surged a record-setting 17.70%, reversing April’s 14.70% plunge. Must have items on consumers’ lists included clothing and accessories, up an eye-popping 188%. Sales at sporting goods, hobby, musical instruments, and bookstores rose a robust 88.2% as consumers appeared to be preparing themselves to spend more time at home. The auto industry also got a shot of good news with motor vehicle and parts sales up 44% as it looks like more and more commuters were trading public transportation for the serenity and safety of their own rides. Not surprising, restaurants and bars were largely left out of the consumer spending spree as most states limited their establishments to reduced seating and/or takeout options only. Although the surge in consumer spending is certainly a positive for the economy, it remains to be seen if the pent-up demand in May’s numbers can translate into a sustained recovery.

Building Permits Rise as Homebuyers Flock to the Burbs

Home construction remained healthy as homebuyers continued to pick up their stakes and head to the burbs. Permits for new construction rose 14.40% in May. Strength was particularly notable in the single-family home segment where permits rose 11.90% to a rate of 745,000 units. Builders remain positive on the new construction, encouraged by robust demand for single-family homes in lower density neighborhoods. Overall, builders broke ground on 974,000 units, up a seasonally adjusted annual rate of 4.30%. The numbers generally look promising given that rates are expected to remain low for quite a while and supply is so limited relative to demand that a temporary, economic dip would likely not pull housing construction below equilibrium.

Factories resumed operations in May, with industrial production up 1.40%. That’s a strong rebound normally but pales in comparison to the record -12.40% decline reported in April when non-essential factories were shuttered in order to contain the pandemic. Manufacturing output rose 3.80% in May as auto plants reopened, chipping away at April’s -15.50% slide. The month’s gains were capped as mining production and utility output reported declines. A slow restart for many plants has hindered demand for mining and utility output, but both should recover in the coming months as factories start to inch back to pre-pandemic production levels and supply chain disruptions are resolved.

The S&P 500 managed to gain back most of its -4.80% decline from last week. This week’s reports continue to show the effectiveness of the stimulus programs in having backstopped the economy and investor sentiment along with it. Those programs come with expiration dates in late summer or early fall, however, and the question is whether the economy will have adjusted to being able to operate efficiently while we’re still likely to be dealing with widespread COVID. This week’s jobs numbers — a major economic indicator — showed we’re still not out of the woods. While May’s jobs report showed widespread hiring across the nation overall, reducing the jobless rate to 13.3% from April’s 14.7%, Thursday’s unemployment insurance report took some of the shine off the report by showing that an additional 1.5 million individuals filed for new unemployment benefits just last week. Inconsistent employment data such as this is not necessarily unusual during the early stages of a recovery. Some companies have an immediate need for labor simply as a function of reopening (i.e. retail, bars/restaurants), while others are still retooling their operations and headcount with an eye on the profitability damage that COVID will continue to inflict. From a macro perspective, some of this profitability is simply reallocated. One industry may be less profitable because more is spent on remediating COVID’s impact (i.e. airlines), while at the same time another may be more profitable (i.e. the cleaning supply industry). It’s a push economically speaking. Presuming COVID sticks with us for a while, however, the question for investors is really to what degree does COVID reduce overall activity once we’re in a steady state. This market continues to respond to data believing we are experiencing a true “V” shaped recovery, but the likelihood is that it ultimately won’t prove to be so much of a “V” as it is a square-root recovery once we get further along in the initial bounce.

Traders will be watching existing and new home sales as city dwellers flock to the burbs to escape COVID-19. They’ll also pour over the latest spending figures from the durable goods report.

The History of Juneteenth

Today is Juneteenth which marks the anniversary of the date — June 19, 1865 — that federal troops delivered the news to Galveston, Texas, that enslaved African Americans had been freed. Texas had been the last of the confederate states where enslavement continued, despite the end of the Civil War on April 9, 1865. The arrival of Union troops in Galveston occurred two years after President Abraham Lincoln issued the Emancipation Proclamation declaring “that all persons held as slaves” within the rebellious states “are, and henceforward shall be free.” Upon arrival, U.S. General Gordon Granger read General Orders, Number Three: “The people of Texas are informed that, in accordance with a proclamation from the Executive of the United States, all slaves are free.”

The rebellious states referenced in the Emancipation Proclamation were the 11 confederate states that seceded from the Union after Lincoln was elected president. The president’s proclamation only applied to places under Confederate control and not to slave-holding border states or areas already under Union control. However, as Union troops advanced into the South, many enslaved people fled behind Union lines. Prior to Granger’s declaration, an estimated 250,000 people were enslaved in Texas. The official end of slavery did not occur until the Thirteenth Amendment was fully ratified in December of 1865 abolishing slavery throughout the United States.

Juneteenth is a combination of “June” and “nineteenth”, and it is also called Freedom Day, Juneteenth Independence Day, or Emancipation Day. The first known Juneteenth celebrations began in 1866 in Texas and the celebrations soon spread across the country. Today, 47 states and Washington, D.C., recognize Juneteenth as either a state holiday or a ceremonial holiday. The day is commemorated through community events, parades, barbecues, prayer, and other celebrations. Millions of Americans and people across the globe are observing Juneteenth today and honoring its significance as a cause for celebration and remembrance. 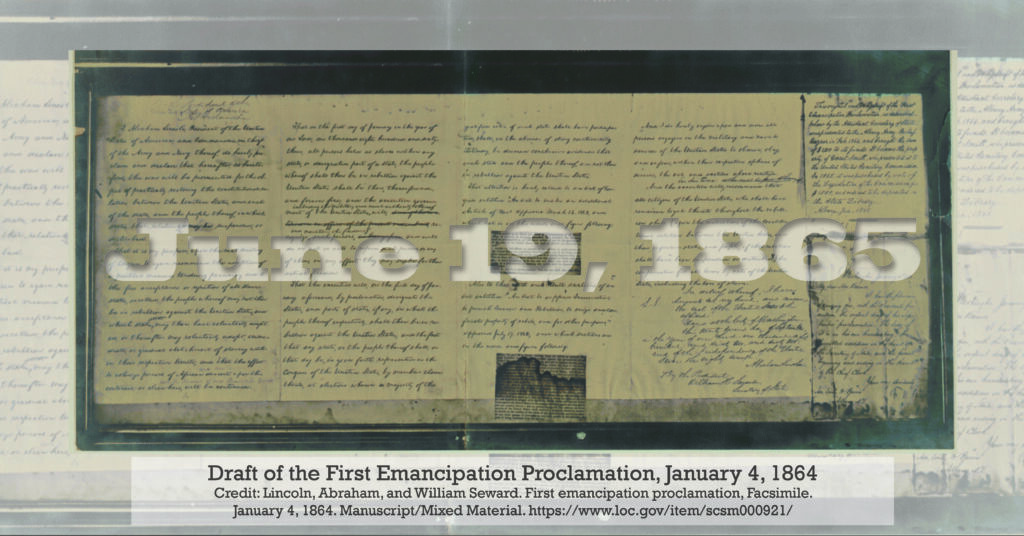