Optimism fizzled during the week’s shortened trading session. Bulls had initially sought to build momentum on last week’s positive shift in sentiment over the health of the U.S. consumer, but a better-than-expected jobs report and healthy ISM Manufacturing and Services reports brought the Fed’s rate path back into focus. The strength of those reports suggests the Fed remains very much on track to hike rates 50 basis points (bps) at its next two meetings, while raising the prospects that the Fed might continue at an aggressive pace well into the fall. Daily volatility managed to decline relative to recent weeks, but with Fed concerns back on the table, the S&P 500 slipped -1.63% on Friday – delivering a -1.20% decline for the week.

Good news for workers was bad news for investors who booed May’s nonfarm payroll report. Businesses added 390,000 to the payrolls during the month, surpassing economist estimates of 328,000. Meanwhile, the unemployment rate held steady at 3.60% even as more workers dipped their toes back into the labor pool, with the labor force participation rate rising to 62.3%. The much-watched average hourly earnings figure rose 0.30%.  This matched April’s pace, but the potential silver lining was that year-over-year, average hourly earnings rose 5.20%, down from 5.46% in April, which may indicate that wage inflation is softening slightly. Employment gains were broad-based with leisure and hospitality businesses adding 84,000 to payrolls, hoping it will be a summer of sizzling spending. Professional and business services continued to man up, adding 75,000 to their headcount. That’s up from the 49K added last month. Government hires rounded out the top three, adding 57,000 workers. The retail sector had the weakest showing, shedding 60,700 workers now that businesses are trimming payrolls amid an ongoing spending shift from goods to services. Overall, it was a strong jobs report showing demand remains healthy despite high prices, but markets worried that the strength of the data may bias the Fed to be more aggressive than what they have already signaled.

Get It While You Can

The theme from businesses lately has been the notable shift in consumer spending from goods to services. While that may be happening in aggregate, business concerns over needing inventory for the back to school and holiday shopping seasons kept factory floors buzzing in May. Manufacturing activity picked up steam with the ISM Manufacturing Index rising to 56.1, up from 55.4 in April. Readings above 50 indicate expansion in the manufacturing sector, while readings below indicate contraction. Order growth remained strong with the ISM’s forward-looking new orders sub-index rising to 55.1 from 53.5 in April. Meanwhile, the order backlog continued to grow as the survey’s gauge of order backlogs rose to 58.7 from 56.0 in April, driven in part by China’s zero-Covid policy and a shortage of workers. The survey’s measure of factory employment fell to 49.6 from 50.9 in April, signaling businesses continued having trouble attracting and retaining talent in a hot labor market. An estimated 11.4 million jobs remained unfilled in April, providing many opportunities for workers to switch to jobs with better pay, benefits, and/or working conditions. They continued to do just that in April with 4.4 million people quitting their jobs – just 25,000 fewer than in March. Considering the headwinds facing the manufacturing sector, this report was particularly strong, indicating that concerns over an imminent recession were likely misplaced.

High prices and labor shortages slowed expansion in the services sector to its lowest reading since February 2021. The ISM Services index slipped to 55.9 in May from 57.1 in April. Despite the drop, the index remains firmly above 50 which signals continued expansion. Business activity, which parallels the ISM’s measure of factory production, fell 4.6 points to a two-year low of 54.5. Demand, however, remains strong with the index for new orders rising to 57.6 from 54.6 in April. Similar to the manufacturing sector, a shortage of workers to meet production continues to hold business back but firms are making strides in filling positions judging by the employment index rising back into expansion territory from 49.5 the previous month to 50.2 in May. Last month’s poor retail sales outlooks from Target and Walmart foretold a demand shift to services away from goods, but high prices and the inability to attract and retain workers have made it challenging for the services sectors to expand to the degree they would otherwise be capable. For the time being, that seems unlikely to change.

Markets had hoped to parlay last week’s good news on the consumer with good news this week that the labor market and broader output indicators are starting to self-regulate. That was not at all apparent in this week’s reports where the jobs and ISM data continue to point to a hot economy. The idea that the small tightening the Fed has undertaken thus far would be enough to change trajectory was optimistic to begin with, but Friday’s data dispelled that notion and concerns shifted back to just how far the Fed will need to go to tame inflation. The market’s reaction was simply a case of wishful thinking. Despite this week’s disappointment, the upside is that we didn’t see nearly the degree of fear we’ve seen in recent weeks. This helped keep the volatility and momentum under control, but next week could prove eventful with May’s CPI set to be released. Bulls have been pointing to small indicators of price softening in recent weeks, which could spark a rally if born out by the data, while Fed concerns are likely to be in full force if CPI misses to the high side.

Consumers have been feeling the heat of rising prices with the CPI index hitting 40+ year highs. The summer stands to be another scorcher as May’s CPI Index is expected to rise 8.20% year-over-year. That would be relatively in line with April’s 8.30% print. However, there could be some unexpected price relief as consumers shift from buying stuff to doing stuff. The pivot should help lower demand for goods and trim the April trade deficit. In overseas news, Shanghai has finally emerged from its two-month zero-Covid lockdown. With consumers seeking to make up for lost time, businesses are sure to ramp up production to meet their needs. That should help lift China trade and PMI figures which are to be released next week.

Today is National Donut — or Doughnut — Day which has been celebrated on the first Friday of June for more than 80 years. The holiday was instituted in 1938 by the Salvation Army to honor the volunteers who served donuts to U.S. soldiers stationed in France during World War I.

The volunteers had planned to bake cakes and pies for soldiers on the front lines. However, the closer they got to the trenches, the fewer supplies they had. They improvised and cooked the donuts in pans over open fire. The volunteers did not invent the donut, but they are credited with increasing its popularity. Food historians offer a murky history of the origins of the sweet treat. Archeologists have found fossilized bits of what look like donuts in prehistoric Native American settlements, and ancient Greeks and Romans are known to have enjoyed fried cakes with honey.

Donuts have also been traced to Dutch immigrants in New York City who made olykoeks, or oil cakes, by frying lumps of dough in lard. They were also called oliebollen, or “oil balls” in English. In 1809, a book by American writer Washington Irving on the history of New York referenced “balls of sweetened dough, fried in hog’s fat, and called doughnuts, or olykoeks.” Germans made an early version of the donut called berliners, and a recipe for a German jelly donut appears in a cookbook from 1485. Isreali donuts are called sufganiyot, the French enjoy beignets, and in Italy there are bomboloni. The modern version of the donut is likely a combination of many cultures, but at least we aren’t calling then oil balls anymore.

An American sailor named Hanson Gregory claims to have invented the ring-shaped donut in 1847. He told the Washington Post in an interview 50 years later that he used the lid of a tin pepper box to cut the hole. One version of this story credits Gregory’s mother Elizabeth with creating the donut by putting nuts in the center because the dough tended not to cook all the way through. It’s likely that other bakers realized the dough would cook more evenly with a hole in the center and adopted the technique.

The first automatic donut machine was invented in 1920 in New York City by Adolph Levitt, a Russian immigrant who founded Mayflower Doughnut shops which became the country’s first donut chain. Levitt opened his donut business 17 years before the first Krispy Kreme and 30 years before the first Dunkin’ Donuts. The culinary entrepreneur printed what is known as The Optimist’s Creed or “donut philosophy” on his donut boxes throughout the Great Depression and into the 1970s:

As you ramble on through life, brother,
Whatever be your goal,
Keep your eye upon the doughnut,
And not upon the hole.

Levitt is not credited with authoring the creed, and its origins remain unknown, but the poem offers inspiration and perspective to see the glass as half full.

Happy National Donut Day from all of us at Probity Advisors. 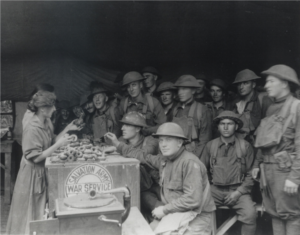